Holidays are such fun…

Welcome to my blog!

I looked up the meaning of the word blog to be sure I understood the context of the posting. What I learned was a blog can be virtually anything—a topic, an opinion, an internal discussion, a pondering, or just a plain old rambling. I also learned that a “good” blog allows others to comment; so far, so good. Let’s get blogging!

I’ve read a lot of blogs lately, some good and others not so much so. Some were self-centered, some were expressions of an opinion, some were helpful, and some were ramblings on a particular subject. So therein lays the rub. What do I want my first blog to be about?

Being a writer, one learns (at some point) to sit back and be a constant observer. We draw characters, scenes, descriptions and stories from not only what we experience but also from what we observe. I had a wonderful opportunity to watch the interactions of family members last week. It was an eye-opening experience. I will not use real names to protect the innocent, although there were only one or two innocents and they shall remain nameless. The others…well, they’re on their own.

First, there was the mental preparation for the deluge of individuals who would be vying for attention. We arrived at the approximate appointed time. You know, the “come whenever,” meaning sooner rather than later. Since there was alcohol involved, I was willing to brave the waters sooner.

We, my wife and I, had not even breeched the threshold and the assault began. Without actually using the words, “Look at me, look at me!” it started and I watched as others gathered in the tight space became frantic and hassled. Mission accomplished by “Look at me.” I smiled, clutching the wine and my slippers, and ignored it all. Said family member did manage to get the attention of a few. Not mine in particular and, funny enough, I don’t think it even mattered, as long as someone was paying attention. The Social Director waved her oven-mittened hands in an attempt to usher everyone from the garage into the house while rolling her eyes and stating, “I’m trying to cook dinner!”

I wanted to say, “I certainly hope so,” but I held my tongue and kept smiling. My only thought being “Where is the corkscrew?” Once my shoes joined the growing pile in front of the door, I entered the chaos proper. After shedding my vest and scarf, I kissed the sanest of the bunch and gave him a hug before heading back to the kitchen. I was on a mission.

There are so many other things which took place, I haven’t the time or the space to relate them here, but trust me when I say you can’t make this shit up. Not in a million years. After said wine was poured and I took a healthy gulp, I sat back and observed the mayhem of the holiday. It occurred to me in an off-handed kind of way why anyone in their right mind would ‘give thanks’ for inviting a bunch of psychos into their home. I shrugged. I’d certainly done it enough times, just with a different bunch of psychos.

It was fun munching on cheese and crackers and sipping a very good vintage as the tension grew and orders were given and promptly ignored. This wasn’t my dance, though I paid the admission price like everyone else, admitting they were also ‘my’ family. There’s different levels of insanity. I repeatedly asked if I could help, but the Social Director was trying to keep Look at Me in line. “Good luck there,” I thought. 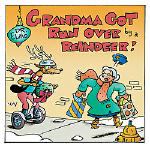 When the first bottle was done so was the turkey, but if they actually expected me to make it through dinner, I was going to need more. Second bottle opened. Yay. Reinforcements for polite dinner conversation.

Thirty minutes later, we all somehow managed to make it to the table and sit in our assigned seats. Yep. The only thing missing were the place cards. During the passing of the feast, I gave thanks that we could escape to our hotel room. The quietest ten minutes took place while everyone stuffed food in their mouths. Another blessing.

I will save you the details of the near decapitation. Figuratively. If anyone there started wielding a knife for real, I would have disappeared without a trace. Suffice it to say, we lived through another holiday with a modicum of grace, managing to not piss off too many of the family. Then I smiled.

Author of Lesbian Fiction, including romance, intrigue, and erotica.
View all posts by Renee Roman →
This entry was posted in Uncategorized. Bookmark the permalink.

1 Response to Holidays are such fun…